Ideally, an electrical power system in every certain point should show a perfectly sinusoidal voltage signal. However, it is difficult to preserve such desirable conditions. The deviation of the voltage and current waveforms from sinusoidal is described in terms of the waveform distortion, often expressed as harmonic distortion.

Harmonics are created when nonlinear loads draw nonsinusoidal current from a sinusoidal voltage source or are generated by purpose by active components. Harmonic distortion is caused by nonlinear devices in the power system where driven frequency is the power system fundamental component fo. A nonlinear device is one in which the current is not proportional to the applied voltage. While the applied voltage is perfectly sinusoidal, the resulting current is distorted.

The harmonic emission of power electronic components can be categorized in characteristic and non-characteristic harmonics. The characteristic harmonic emissions are determined by the converter topology and the switching pattern applied. For instance, a typical configuration is a two-level, three-phase voltage source converter with sinusoidal pulse-width modulation. The modulation frequency ratio mf is defined as the switching frequency fc divided by the power system fundamental frequency fo. In double-edge naturally sampled pulse-width modulation significant sideband harmonics in this carrier group will occur at frequencies of ωct±2ωot, ωct±4ωot. And for the second carrier group, the significant sideband harmonics will occur at 2ωct±ωot, 2ωct±5ωot, 2ωct±7ωot. All triple sideband harmonics (e.g. 2ωct±3ωot, etc.) are canceled between legs because the phase angles of these harmonics rotate by multiples of 2π for all phase legs (i.e. common mode signals). [2], [3].

where Amn and Bmn are the Fourier coefficients.

Non-characteristic harmonics are not related to the converter topology, but are determined by the operating point and control scenario of the individual converter. Therefore, these are weakly correlated or even completely uncorrelated between different wind turbine generators [4].

To show how harmonics have being been more and more important in electrical engineering and power system studies a popular electrical engineering database was investigated. Institute of Electrical and Electronics Engineers (IEEE) is considered by many as one of the biggest professional association gathering electrical and electronics engineers from many fields. The association has an extended digital library comprising more than 3 million technical and scientific documents. Unfortunately access to the documents if not open for all interested and therefore knowledge sharing is limited especially for small research units all around the world.

Analysis of such database form harmonic and wind power research perspective can give a good overview how advancement of technology in both areas has been developed in the space of the years. At the begging let us see how publications regarding harmonics have appeared.

The first paper regarding harmonics in the ieee database is from 1899 but the most significant development within the area of harmonics started in late 80's. In Figure 1 one can see that the interest of harmonics is still increasing. Up to now there are more than 55000 of publications only about harmonics. Obviously harmonic analysis can be applied in many fields of electrical engineering. Let us additionally see how in the same period the interest in wind turbines and wind farms development increased.

In case of research associated with harmonics the tendency is rather linear, but regarding both wind turbines and wind farms there is an exponential growth of interest directly reflected in number of publications. This tendency can be easily seen in Figure 2. This general interest in wind power can be also easily seen in increasing number of commercial projects. Therefore harmonics analysis in this particular field of electrical engineering seems to be important also from market tendencies perspective.

Figure 3 shows that increasing interest of wind power technology is correlated with increasing world capacity of wind power [1]. As it can be concluded this tendency will be increasing within next few years. Therefore new research projects are required to extend knowledge and experience in the area of renewable energy sources. This also implies an increasing interest of harmonic research within this area of power industry. As it can be seen also in Figure 2 wind turbine studies are more popular than wind farm. It seems to be a natural way of research. Although it also indicates that there is much less experience with wind farm analysis as a whole system comprising many wind turbines and other components. The first observed publication in the IEEE database regarding wind turbines is from 1958 but regarding wind farms is much later (1982). Even less experience is gained in offshore wind power solutions. This field is newbie (first mention in 2000) in comparison to onshore installations. Anyway nowadays knowledge sharing capability and technology development allow deriving knowledge from other fields and continuous improvement.

In Figure 4 one can see even clearer tendency of exponential growth of interest and research within the field of offshore wind farms. I hope that based on presented above facts one can see that there is a great interest in offshore wind power solutions which creates new challenges to the wind industry from harmonic analysis perspective.

I would like to mention at the begging that for more than last three years I have been working on various aspects of harmonic in power system and power electronics. Almost all of my research activities were focused mainly on the application of harmonic analysis in large offshore wind farms. Since I started there have been few observations and ideas that I would like to share with you. From my perspective such knowledge sharing approach can bring closer harmonic analysis in electrical engineering and allow to establish a dialog between engineers and physicians from different fields of science. Let me start from the historical background of harmonic analysis.

First well documented appearance of harmonics in relation to mathematics and science is from ancient Greek. The science which pursued the investigation of multiple and epimoric (ratios of the form [n+1]:n) ratios in music was concerned with the mathematical 'fitting-together' (harmonia) of the constituent notes and intervals of music [1].

Harmonics were described by Claudius Ptolemy, who related musical harmonies to the properties of mathematical proportions derived from the production of sounds themselves. Ptolemy argued for basing musical intervals on mathematical ratios, in agreement with the followers of Pythagoras, backed up by empirical observation. Ptolemy wrote about how musical notes could be translated into mathematical equations and vice versa [2]. Those harmonies he considered to be distributed in all aspects of the physical universe. In particular, they were there in the phenomena of the planets and the human soul [3].

Nowadays, harmonic analysis is the branch of mathematics that studies the representation of functions or signals as the superposition of basic waves. It investigates and generalizes the notions of Fourier series and Fourier transforms, mathematical tools significantly useful in different areas of engineering. The basic waves are called harmonics, but the name harmonic in this context is generalized beyond its original meaning of integer frequency multiples.

It can be said that the beginning of nowadays harmonic analysis reaches back a French mathematician and physicist, Joseph Fourier, who originally defined the Fourier series for real-valued functions of real arguments, and using the sine and cosine functions as the basis set for the decomposition. Fourier series could be used only for analysis of periodic functions.

Many different approaches of defining and understanding the concept of Fourier series have been developed since that time. All are consistent with one another, but each of which emphasizes different aspects of the topic simultaneously extending significantly the basic concept of harmonic analysis. Some of the more powerful and elegant approaches based on mathematical ideas and tools not available at the Fourier time extended his original work and are successfully applied in harmonic analysis at present.

Many other Fourier-related transforms (e.g. Laplace transform, Fourier transform, short-time Fourier transform, wavelet transform) have since been defined, extending the initial idea to other applications. This general area of inquiry is now by physicists and engineers called harmonic analysis.

I hope this short introduction appears to be interesting for you and can encourage you to check later posts regarding various aspects of harmonic studies in engineering and large offshore wind farms. If you have any questions or comments do not hesitate to drop me a line below.

I had been struggling with this problem a while before I did manage to find a work around. It was actually quite important for me to change the font name in Bode plots because I decided to use everywhere Cambria in my report. Normally Heveltiva is used by default in Matlab.

In general it is possible to change font in Matlab plots without any problems. But this is in case the standard package. It should be emphasized that each of Matlab toolboxes is developed by separated teams of specialists. That is why sometimes different features can be solved with a different approach and actually in Control System Toolbox it is not predicted to change font name. You can change the size or style but not the name.

Available parameters for different labels in case of Bode, Nyquist, etc. plots are the following

And here is the final result. 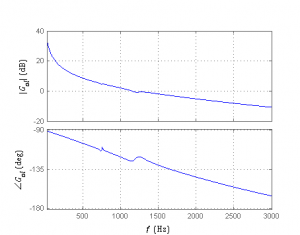 Another solution is to get the frequency response into arrays and display results using functions form Matlab base package. In this case it is also possible to change axes font name.

You can also change the default system font for all figures and axes by putting the following code at the beginning of your m-file. Please note that this will change your default font during your Matlab session. I do this quite often if I do not want to think so much preparing figures for printing.

Hope this helps and looking forward to see some comments.

Normally I work in different toolboxes of Matlab on purpose. Either it is for my research project purposes  or due to my research project purposes. That is why I came up with an idea to do something in Matlab that would not have any application. I wanted to do something what would look nice and be by itself. Later of course I found some interesting application areas of my work but let us start from the beginning.

I decided to use Image Processing Toolbox because, in my opinion, no matter of what working on images should always give interesting results. Why not to use some of my pictures from the past taken with my old Minolta Dynax 700si. I still should have it somewhere in the basement.

Due to the fact that the picture was taken still in analog technology and scanned in any photo lat the quality is not so good. Even in the small picture (a) noise can be clearly seen. I decided to get rig of it by application of a digital filter. A lot of noise and sharp edges that can affect the final result. In order to make the picture more smooth we will use a low-pass filter (b). I decided to use Gaussian filter with the convolution matrix as presented above. 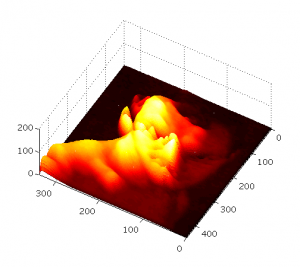 This apprioach can be succesfully used if we would like to evaluate how objects are shaped by light. A good example is in case of body shaping by either attending gym or fitness. If we simply cannot assess if our muscles are sufficiently shaped, just take a picture and do some processing in Matlab. Probably other applications can be found. Please let me know if you have any suggestions by posting a comment.

And an exemplary code from Matlab showing how to display two-dimensional matrix of double precision numbers.