Posted on September 24, 2011 by Łukasz Kocewiak

A while ago I had a horrible problem with MS Visio 2007. I was really happy that I did manage to prepare nice vector graphics in Adobe Illustrator CS4. Among others it was a map indicating one of onshore wind farms that I analyze within the confines of my research project. Normally at work I do not have such fancy tools as Adobe software, so I had to save results in something that MS Visio would be able to open. 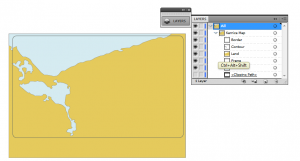 I decided to use an open standard vector format such as SVG is. Since it is an open standard it should be possible to easily save it in Illustrator and hypothetically without any problems open in Visio. I would like to emphasize that this version (i.e. SVG 1.1)  was developed in 2003 as it is stated on the W3C website. Actually Visio can deal with SVG 1.1 but in a selective manner. How big was my disappointment when I realized that actually well described in the standard clipping path is not supported.

If one would like to open such kind of SVG file with clipping path in Visio the error dialog box appears which is presented below. MS Visio 2007 is simply not capable to open files  including clipping path definitions. I tried to find any solution how to deal with this problem via Internet but unsuccessfully.

In the error log file generated by the software it is clearly stated which elements from SVG structure are incompatible. One of possibilities to work around this problem is to delete unsupported fragments of the code. Of course this would affect that elements of our vector graphics which should be hidden by the clipping path will be visible.

Please remember also to remove information about the clipping path from each of elements included in the vector graphics. Later in MS Visio 2007 it is possible to use other methods of masking unwanted elements or parts of them.

I hope this help and please shear your experience with me regarding this problem by adding a comment. Cheers!

This entry was posted in Software and tagged clipping path, SVG. Bookmark the permalink.